There have been so many times I’ve been convinced that my life was headed exactly where it was supposed to go. Whether it was scoring the job I wanted, successfully moving across the country, or even something as silly as finding the most stunning pair of Jimmy Choos in my size on major clearance at Nordstrom Rack.

Moments like these can so easily give us an instant sense of complete accomplishment and contentment.

But just when you think your stars have pretty much aligned, someone can cross your path and cause the needle of your life’s compass to start spinning in a whole new direction. Once they start shaking up your world a little, you realize there’s no such thing as coincidence because they were so obviously put there for a reason.

I’ve learned there is no way I could ever begin to plan or imagine on my own what is in store for my future and that is probably one of the most electrifying feelings.

For the past year or two, I’ve been slowly mapping out the plans to launch a business. A few months ago, I was finally at a place where I was ready to start setting up meetings, obtaining clients, and becoming a real life small business owner.

Right at this time I unexpectedly met a certified life and business coach who, after one conversation with me, offered her expert advice for no reason except that she felt called to help me. Instantly, I dropped what I was doing and followed every ounce of wisdom she gave me. She inevitably introduced me to other smart and fabulous people she knows and eventually I took my business plans in a whole new direction.

This has led to more planning, which takes more time, and I have a serious patience problem so it’s not easy. But how could I possibly think this scenario was a coincidence? God probably laughs at me a lot when I seem to think I have it all figured out on my own.

It’s true what they say about certain things happening when you least expect it. I never believed that ridiculous phrase until I recently met people who have not only changed my whole direction, but crossed my path at the moment I didn’t even know I needed them most.

So don’t spend time worrying about the exact path you’re headed down or who is coming along because you probably won’t be able to figure it out. If a new direction is calling, please do not ignore it. Keep dreaming and scheming. Be accepting of new and scary paths because you can trust me when I say they lead to the best results.

Special thanks to Amber Hurdle for her life and business coaching. Learn more about her (and other fabulous female entrepreneurs I have learned from) on my Like A Boss page! 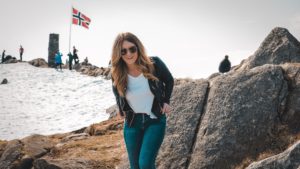